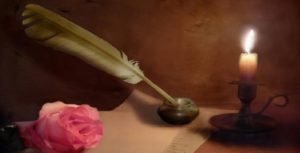 I wrote my first post two years ago. I promised myself I’d write 24, then stop.

It’s on a subject dear to my heart: the five creative writing techniques everyone can use at work. The next and final post (in early September) will be on something dear to your heart.

Do you have a question about grammar you don’t dare ask at work? Are you struggling with emails to major donors? Do you have a life-saving tip that you’d like to share? Are you coaching a nervous young writer who makes niggling mistakes – or are you that writer?

Whatever’s on your writing mind, drop me an email over the summer (to [email protected]) and let me know. I’ll respond in my next post. And yes, I’ll keep you, my source, anonymous.

In the meantime, here’s something I hear all the time: you can’t be creative at work.

Well, I’m a creative writer, and I don’t agree. But I do understand. If you’re an after-hours novelist or poet or stand-up comedian, you’d probably rather watch paint dry than check for typos in the annual report.

Take heart. You’re needed! You’re behind every great charity video, every successful appeal or funny blog or snappy headline. You can make people laugh or cry, you can explain complicated things, and you can melt away prejudice.

You can do that because you know the five fool-proof techniques that stand every writer in good stead. Here they are.

Your first sentence, first line, first chapter: lose your readers here, and you’ve lost them for ever.

Here’s an example of a strong start:

When you gaze upon the brown muddy waters of the Thames you could be forgiven for thinking that this, the busiest urban river in the UK, is dirty and lacking life. But you couldn’t be more wrong.

That’s from a blog on the Zoological Society of London’s website. The writer uses a powerful creative technique. She (or he – the byline is simply “ZSL”) makes us ask a question. Why are we so wrong? What are we going to learn? The challenge creates suspense.

This writer also uses adjectives: brown, muddy, urban, dirty. Adjectives get a bad press. It’s a shame. They’re part of the creative tool-kit. They help to create scenes that we can visualise.

Here’s another opening, this time with no visual adjectives, from an unexpected source for this blog: the Deseret News (a faith-based newspaper in Utah):

It was a slow news day when Cara Jones was assigned to cover a fatal car accident and was sent to the victim’s home.

When she arrived at the address, a teen girl sitting on the porch rushed up to her. “What happened to my mom?” she asked. “My dad called and told me to wait here.” Jones watched in horror as her camera crew’s presence confirmed the girl’s worst fears.

It was the beginning of the end of Jones’ journalism career — she no longer wanted to document fear and tragedy.

It’s a classic creative approach beloved by journalists: you start with a dramatic moment that changes somebody’s life. In a long article or a novel, you might include more detail. But even in this quick sketch you probably “see” the teen girl and the porch in your mind’s eye. That’s because our minds are hungry for stories. As soon as we’re offered a juicy one, we start to collaborate with the writer in our imaginations, filling in the gaps.

You don’t need to describe everything at the beginning. You just need to get out of the gate.

We have to write about complicated things at work, from targeted gene therapies to tax rulings on gifts in kind. How do we do that creatively?

The first rule of creative writing is love your subject (no matter how flawed). That means writing with enthusiasm. The second is trust your reader (no matter how invisible.) And the third and most famous is: show, don’t tell.

For charity writers, I prefer: teach, don’t tell. Here’s why.

First, donors want to learn from us. We’re the experts on our cause. When you write like a teacher, you’ll naturally write as if you love your subject.

Second, when you teach (rather than tell), you have to trust your readers to share your passion. Again, that means you’ll write better.

What does teaching rather than telling look like on the page? Here’s an example from the Whales and Dolphins Conservation website:

If you’ve ever watched whales or dolphins out at sea, or even just seen photographs of them, you’ll know that there’s often much more to look at than just a fin poking out of the water. Heads, tails, sometimes entire bodies are thrust above the surface, in a glorious mixture of behaviours, each of which signifies something special.

Perhaps you’ve seen dolphins swimming along the pressure wave caused by a boat: this is known as bow-riding, which must be great fun for them. At quieter times they might be seen ‘logging’, the term given to floating on the water’s surface, a great energy saving position.

Then there’s lobtailing, sometimes known as tail-slapping, which is just what it describes: a hard smack of the water by a whale’s fluke, or tail. One of the reasons this might be done is in order to cause a loud sound to stun or confuse prey. When the other end of the body appears – i.e. the head – for a good look around, then this is known as spyhopping.

These paragraphs brim with enthusiastic teaching. The use of “you” makes us feel that the writer is speaking to us. She (or he – another blog with no byline!) keeps it clear with simple transitions: “Then there’s lobtailing…” The verbs — poking, thrust, floating, stun – convey her delight in the animals’ energy and playfulness, and her adjectives (glorious, hard) add just the right vivid touches.

When you write with enthusiasm like this, you’re writing with love.

Like all good teachers, she also uses down to earth language. The phrase “which must be great fun for them” might skate a bit too close to anthropomorphism for hard-core biologists, but animals do have fun, and I wish more conservation charities reminded us of that. “A good look around” is another homespun phrase that makes us feel that she’s speaking directly to us. She even gets away with the casual “this is” opening — something I usually advise people to avoid.

You can do all this, too, if you’re really teaching us something.

Just think of your car. If you get a flat tire, you might fix it yourself. If you need an oil change, you might know the drill. But if your engine starts smoking, it’s time to call the mechanic.

It’s the same with wells. That’s why we believe in funding maintenance programs and employing skilled mechanics to handle larger breakdowns.

That’s from Charity:Water, who’ve been praised high and low for their fabulous communications. It’s in the middle of a piece about well maintenance. Instead of a technical explanation, we get a metaphor we can relate to – again, with a warm “you” and everyday language (“know the drill”).

Thanks to the analogy, the point is made. They need money for maintenance as well as for digging wells. Got it.

You probably write long sentences. You might have loads of information to pack in. You might also write everything in two or three different ways (see my post on doubling and tripling) just to be on the safe side.

Long sentences can be beautiful. But nothing packs a punch like a short one. Short means seven words or less.

“We’re now refugees. People don’t like us. Everyone lies. I was a kid before. I am older now. I know more.”

I believe a real 12 year old said this. The short sentences capture her despair – and her hard-won wisdom. She doesn’t embellish because she’s hurting and she’s honest.

Creative writers know that heartfelt quotes like this are golden. We listen for them all the time, we write them down, and we keep them short.

That can be hard if somebody sends you a written quote full of long sentences (including semi-colons!). You might think you can’t change it. You can. Slice long sentences into shorter sentences. You can always run it by your source if you’re nervous. I promise you: they’ll like the edited version better.

Here’s a different use of short sentences, from the WorldVision website:

People in Turkana are pastoralists. It’s a beautiful life when there is rain to grow grasses for their camels, cows, donkeys, sheep, and goats to eat. They live simply. Children play. Their parents dance and sing. Families are close. They pray together. But after a succession of droughts, life is no longer beautiful. It’s a nightmare.

Creative writers don’t worry that stripped-down sentences like these aren’t “professional”. We know that for a charity like WorldVision, with a broad supporter base and an emotive appeal, short sentences can conjure up a whole scene – a bustling city, a crowded refugee camp, or the pastures of Turkana.

Short sentences aren’t only for blogs. Here’s another example, from the Anthony Nolan website:

We cure blood cancer every single day. Help us cure it more often.

You could use these lovely, direct sentences (one with seven words, one with six) in a proposal, a letter to a major donor – just about anywhere.

Write short sentences as often as you can.

In workshops, I give people on-the-spot writing assignments. Then I watch what happens.

Most people quickly cover pages. They crouch over the paper, shaking their hands when they get cramp. They don’t want to stop when time’s up.

But some people freeze and write nothing.

Writers who freeze are usually conscientious people who hate to make mistakes. They’re waiting for inspiration to save them.

Wait on. Inspiration visits us creative writers only when we’re already writing. In the meantime, all of us  (including successful published authors) fight anxiety every day.

Here’s how we fight. We sit down until our back hurts, type until our eyes hurt, and rewrite until we think we’ll go crazy. Then we print it out, sleep on it, and read it all again. It might be mostly rubbish, but there’s usually something worth saving. We move that something to the top. Then we go through the whole cycle again.

That’s it. That’s our secret. We keep on writing. We don’t give up.

Don’t you give up, either. Ever.

I’ll be back after the summer, with news from your front lines. I look forward to hearing from you. Write to me soon!