Language is a loaded gun. If you want to start a word duel (and you can’t bear one more conversation about Brexit or Trump), ask people what they dislike most in other people’s writing.

I asked some charity managers and consultants just that. In case you’re wondering: corporate buzz words like “strategy” (instead of “plan”) and pretentious phrases like “at this point in time” (instead of “now”) cause particular offense. Feelings ran high. “Keynote,” said one woman. “It’s usually used as a pompous excuse for being unable to attend a meeting, as in ‘So sorry – it clashes with a keynote I’m giving’.” She signed off. Then she popped back into my in-box. “And also ‘deliberative’ – I haven’t got a clue what it means. Also ‘cohort’ – how is that different from ‘group’?”

Small wonder we care so much when words are used so recklessly by political leaders – let alone keynote speakers who are too important to come to a meeting. And casual speech, it turns out, upsets people just as much as weaselly writing.

“I hate being called ‘You guys’ when there’s only one of me and I’m not a guy,” said a senior consultant. She came back for a second bite, too. “Oh, and when some idiot – usually selling something – says ‘yourself’ instead of ‘you’ e.g. ‘It will be delivered to yourself’.”

Other offenders were “very unique” (if it’s unique you don’t need the very), “passion” or “passionate” (for “anything other than a deep, precious, and rare human emotion”), and “conceptualise” (for think or imagine). I’ll confess to a peeve of my own: people who “reach out” to “share their journeys”. I was recently at a community meeting about the London super sewer where a man jumped up to “share” his “passion” for sewage tunnels and the “journey” he’d been on with them. He might be the world’s greatest expert on sewage tunnels, but he lost me right there.

Who are you staring at?

Well, now we’ve got that off our chests, here’s something I do want to share.

Hatefully bigoted language and name calling are crimes. Let’s assume neither you nor I are criminals. Basic grammar and editing mistakes are mistakes. No big deal. We all make mistakes, and we can learn.

But if you guys go on a very unique and passionate journey from time to time? I’d urge you not to – especially if it’s down a sewage tunnel — but is it such a terrible crime? When we’re tired or frightened, clichés become our crutches. And being made to feel small because we used a cliché, without even realising, won’t help us write better.

I once took a fiction workshop with a famously grumpy novelist who told us never on any account to use the verb to stare – “unless your character wakes up to find a venomous snake on her bed.” He was right. In poorly written novels, characters stare at each other all the time.

I’ve learned a lot from other writers, and I was fond of the grumpy guy – but the only thing he taught me was not to take his workshop again. Scolding novice writers makes them self-conscious, and self-consciousness kills writing quicker than any snake. We need to write without thinking anybody’s looking (or even staring) over our shoulder.

Because let’s get this straight: there is no god of language. No Moses ever came down from a mountain bearing a tablet inscribed with rules about whether or not you can begin a sentence with “because,” “and” or “but” (you can) or end one with a preposition (you can as far as I’m concerned, but now I’m going to hear from my mother). Rules change with time. Last year’s awesome is this year’s cringe.

There is one sin, though, that you and I have both committed. It’s writing muddy sentences.

Muddy is the enemy of clear. It’s the lazy road to a post-truth world (and just this week, post-truth was named word of the year by the OED). When we’re clear, on the other hand, readers can see straight to the bottom of our thinking and know we’re not hiding anything. They can start to trust us.

Clarity takes more than clicking on “Thesaurus” under “Tools”. We have to sort out what we do think or feel or know. We have to ask tough questions. We have to use more of our amazing brains. It’s hard work, and we’re human, and sometimes we get lazy.

Below is a Muddy Waters Chart (Muddy Waters Chart) that lists some of the most opaque words and phrases that people use in charity proposals and reports. You can play “mix and match” with any of the words in the columns. For example, you could mix and match across the columns to write: “It is clear that resources are impacted by deprived beneficiaries.”

Sounds real, doesn’t it? But it’s not. It’s made up. It’s what we write when we’re exhausted, or haven’t been given any good data, or have never actually met any of the people we’re writing about.

That’s the kind of muddy post-truth writing we must fight against. Comb through your writing for these tell-tale words. Add your own pet peeve favourites to the chart. Ask yourself what it is you really want to tell somebody. Say it out loud, in the plainest, most friendly words possible. Then write those words down. Now you’re on your way. 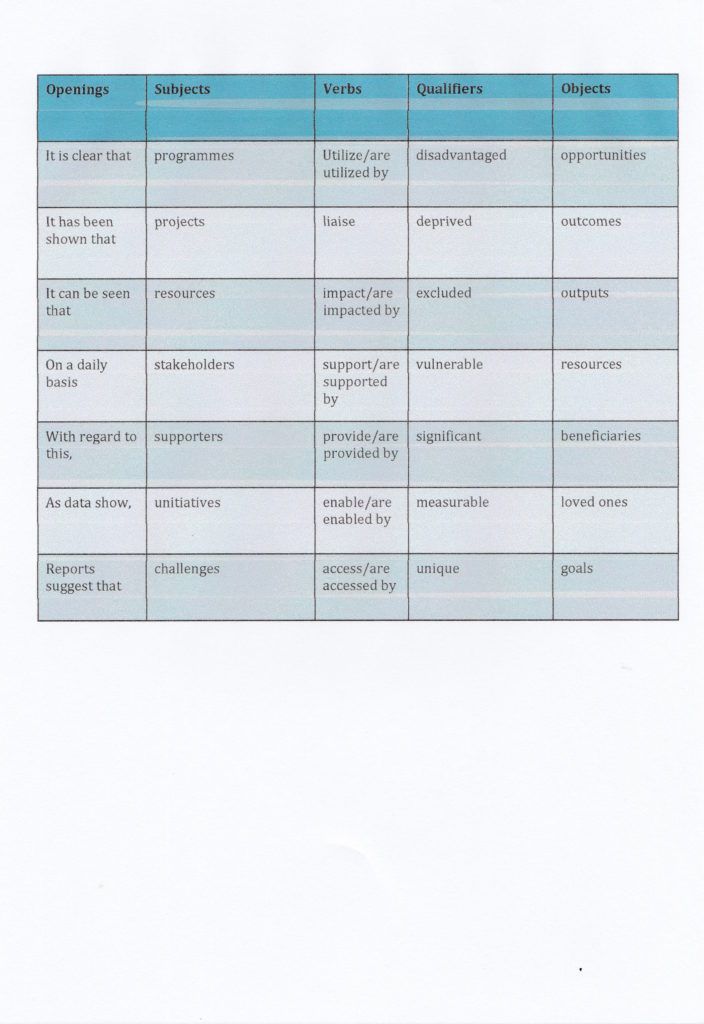