I taught some workshops last week on writing thank you letters. The charity in question had been using the same templates for years, and bit by bit the life had drained out of them.

Here’s a sentence from one of the letters they were sending out:

“We need to continue our efforts to raise over £9 million necessary this year to fund our normal running costs, and your thoughtful gesture at this time is particularly appreciated.”

As one of the workshop participants pointed out, the word “efforts” gives the game away. It’s bad manners to sound needy when somebody’s just given you a gift. (You wouldn’t do that to your favourite generous aunt, would you?) Remember: people give to charities that meet needs, not charities that have needs. A thank you letter is never the place to go on about how much more money you still need, or, for that matter, to use the passive verb form when you get to the actual thank you (“is particularly appreciated”).

“Demand for our services has doubled over the last 10 years,” another letter explained, before launching into detailed lists of the numbers of people served. Fine for a report to the Board of Trustees. Not fine for new donors who just want to know that they’re helping real people get through a tough time.

Yet another paragraph read, “We could not continue in our work without supporters such as you. Your support helps us to provide support … “

The minute you read this out loud, you can hear how often the writer (or writers, since lots of people had had a go at these templates) used the word “support”. The word loses all its meaning through sheer repetition.

The writers knew that there was lots of room for improvement. We did some creative exercises and chatted about what we really want to hear when people say thank you, and I hope everybody left with loads of fresh ideas.

For my part, I went home to find something interesting had arrived in the post.

About six months ago I went to a fundraising dinner for a charity called the Young Women’s Trust. It used to be the YWCA, which, amongst other services, ran hostels for women. Today the Young Women’s Trust doesn’t run any hostels. Instead it works tirelessly on behalf of low-income young women, who still bear the brunt of poverty, unemployment, and economic inequality.

I’m not much of a one for fundraising dinners. Like many writers, I’d rather sit on the sofa and read. I went only because I was asked by somebody I respect. I took along a young woman who’s just started out in the charity sector, and then, thinking I should set a good example, I gave £500 out of the family CAF account to support a training workshop for young low-income women.

I’m mentioning all this because you may sometimes have to organise fundraising dinners, and you might wonder why people go to such events, and why they give. My answer is: we go because we’re asked by people whom we respect, and we give because we feel some social pressure to give. Many of us would rather stay home, but we don’t mind going because we feel proud of ourselves for doing the right thing, and there’s nothing wrong with that.

Except, of course, for the fact that the most difficult gift to get, and the most important, isn’t the first gift somebody gives. It’s the second. That’s why thank you and follow-up letters are so important.

Soon after the dinner, I got a lovely thank you letter from the fundraising director and then, gradually, I sort of forgot about the money I’d given.

So I was surprised as well as pleased last week to come home to a long thank you letter from one of the young women who attended the workshop. Thanks to Abby, who gave me permission to reproduce it, you can read the entire letter at the bottom of this post or click on the link for a PDF version.

What Abby’s Letter Taught Me

There’s lots we can learn from Abby’s letter, some of it quite surprising. Here are my five top take-away lessons:

P.S. The funny thing is, I now want to give again. You’ll see that Abby includes a staff person’s name and phone number in the letter, so if the spirit moves me (or you), I know who to call. And she’s included it in the P.S., which is a part of any letter that people actually read. Job well done! 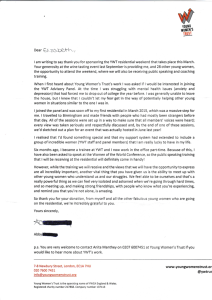